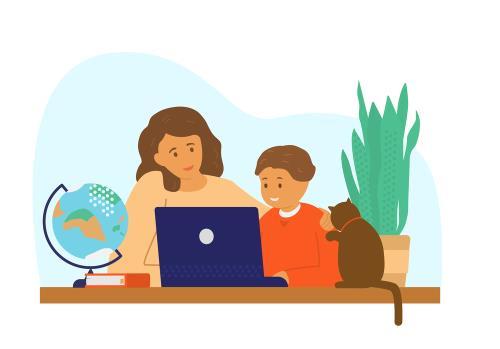 As it looks like we are tentatively moving out of lockdown restrictions for good, many have begun to reflect on the effectiveness (or not) of some of the things that became ‘the new normal’ during the three main lockdown periods.

However, the poll also reveals some worrying details. It suggests that parents on lower incomes, those living in deprived areas of the country, and those with three or more children were far less likely to speak positively about their experience of home-schooling.

The statistic that 24% of parents thought that home-schooling went ‘not very well’ is a worrying enough statistic. However, when you notice how disproportionately negative experiences are prevalent among families with lower incomes, it becomes even more concerning.

This is just another example of the disparity between affluent families and poorer families. It is another sign of how disadvantaged children are struggling to keep up with their peers academically.

Home-schooling became easier over time… for some

Teachers, pupils and parents alike were thrown into home-schooling somewhat last spring. Naturally, there were teething problems. However, as time went on and all parties adapted to the demands - for some - home-schooling would have become an easier and more effective experience.

But, not for all. For students with particular learning needs, a Zoom lesson is never going to be the best way of learning. Secondly, for disadvantaged children, the disadvantage would only have grown the longer home-schooling went on.

As with anything new, there was an element of ‘getting to grips’ with home-schooling. However, if you haven’t got the conditions in your home conducive to learning – or you don’t possess the necessary laptops or digital devices – home-schooling doesn’t really get any easier regardless of how long you do it for. Obviously, with three or more children at home at the same time, the challenges never really decreases either.

Unfortunately, there seems to be a direct link between parents’ earnings and how easily parents adapted to and coped with home-schooling. The poll shows that 34% of parents earning less than £31,200 said that home-schooling went either ‘not very well’ or ‘not at all well’. For parents earning more than £75,000, only 22% expressed similar views.

In conclusion, the results of this Ipsos MORI poll about home-schooling will do nothing to alleviate fears about the attainment gap and how the most disadvantaged pupils have been disproportionately affected by the pandemic.

For families that have space in their homes to create suitable learning environments for children, and the resources to buy the necessary digital devices and broadband access, home-schooling and online lessons has become a viable alternative – at least in the short term – to face-to-face classroom teaching.

However, for the less fortunate and the less affluent, the more online learning has been used the further children will fall behind.