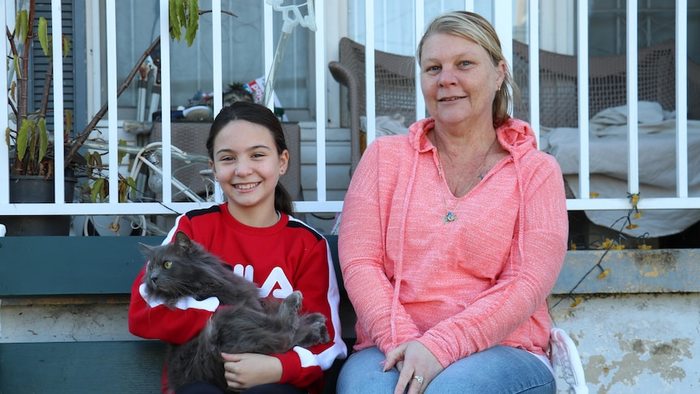 As mum Vanessa helps her 11-year-old daughter Talyah with her homework, the technology is at least familiar: a pen and paper.

But for Talyah, it also creates a problem — much of the rest of her year six class is in a virtual classroom.

"It is harder being away from the classroom because I don't have that many people to ask for help," Talyah said.

"And I can't ask the teacher because I'm at home. I struggle because it's only me and my mum."

Like an estimated 50 per cent of low-income families, Vanessa struggles to pay for internet, leaving her and Talyah with a phone which has poor reception at their home in Fairfield West in outer Sydney.

"I've got a computer but it doesn't work because the dongle ran out of internet," Talyah said.

Right across the country, it's a similar struggle. An estimated one in three Indigenous children do not have internet at home.

But a program from The Smith Family — a program which Talyah is a part of — is trying to change that.

Heading into the pandemic, Anne Hampshire from The Smith Family knew remote learning would widen the digital divide.

"With COVID, we were particularly concerned that students who were already struggling with literacy and numeracy might fall further behind," she said.

In an Australian first, Anne Hampshire organised for tutors to reach about 100 students in two hours of literacy and numeracy schooling for six months.

They wanted to see if overseas success stories using this model would work in Australia.

The group selected students already behind their classmates prior to the pandemic — the average for numeracy was three years behind.

The results are in

The experiment found not only did the students stop falling further behind, but in literacy six out of 10 students caught up to or surpassed their classmates.

"The program really helped them engage in their learning,"  Ms Hampshire said.

"But really importantly, it showed that students were able to achieve greater progress than would be typically expected from average students over a six-month program."

'It was basically impossible for me': How remote learning left this Year 12 student behind When coronavirus suddenly tilted the educational playing field, Ryan Hicklin — stuck with just a pre-paid mobile phone — did not have the tools he needs to learn. Now a charity has stepped in to help.

The families who took part were supplied with internet and a laptop,  and crucial to the program's success was encouraging parents to get involved.

The charity hopes education departments and schools around Australia will replicate this work to help make up for lost classroom time following the results of the study.

"The Smith Family will use the evaluation, it will refine the program and we'll move to a second stage pilot with a larger number of students but we've also helped to expand the Australian educational evidence base," Ms Hampshire said.

"We've used online tutoring in the home in ways that probably haven't been done before."

Educator Cheryl Giombi, who worked with four of the students in the program, said she was inspired by the changes she saw in her students.

"I think it's a modern way of teaching, [a] personalised way of teaching," she said. "And I believe it's the future for children, not just those who are falling behind but maybe children who are advanced in their learning and they need that one-on-one teaching."

Ms Giombi said that as well as being rewarding, it was practical for both and her and the students and the kind of targeted individual learning that did not work in a busy classroom.

Back in Fairfield West, Talyah said tutoring from the program meant she's wasn't as worried by the latest lockdown-induced disruption to learning.

For Talyah it has also transformed reading and writing from a source of frustration to joy.

Her current struggles are fuelling inspiration to share the transformative power of education.

"I want to be a teacher when I grow up because I like helping students," Talyah said.